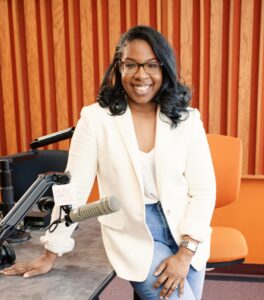 Robin Kinnie is the President of Motor City Woman and Audio Engineers of Detroit, specializing in podcast production, digital radio and audio engineering.

She is dedicated to creating a platform for underrepresented voices in broadcasting and podcasting. As a former contributor to the Podcast Business Journal, Robin highlights issues of diversity of inclusion within the industry. She recently completed “The Top 10 Mistakes New Podcasters Make”, available for download on Amazon and The Motor City Woman Planner for New Podcasters.

Robin serves as the Detroit Chapter Head of Soundgirls.org, a national organization focused on increasing the number of women in audio engineering. Her service for others extends to volunteering as an Advisory Board Member for Y Arts, the arts and humanities branch of the YMCA of Metropolitan Detroit.

She holds an undergraduate degree from the Eli Broad College of Business and a Masters’ degree in higher, adult, lifelong education from Michigan State University.

Robin has been recognized by Walker’s Legacy as part of the ‘Top 25 Women Leading In the Detroit Community’ , Diversity Leader Honoree by Corp! Magazine, the Association for Women in Communications and was recently featured in the Pandora “Pass The Mic” series which highlighted women in audio.

Robin is a wife and mother of three children which she counts as her true lifes’ passion. 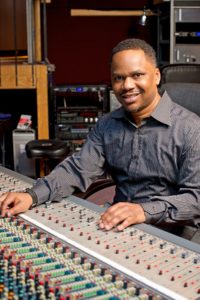 Mike Kinnie a 20+ – year veteran in audio engineering received the majority of his knowledge on-the-job whether it was working in a recording studio or on live audio shows. Mike started climbing the ranks in the early 90’s by first working with the local 38 IATSE union. That led to working such shows as The Rolling Stones at MSU Stadium, The Eagles at the old Tiger Stadium to the hit stage-play Cats at the Fox Theater. Eventually, he began working directly with recording artists in local recording studios (Sound Suite Studios, The Disc Recording Studio and others) engineering their next hit. He also has worked for several Audio Visual companies (AVHQ, PSI, and Bluewater Technologies) during his career. Mike currently works at MotorCity Casino Hotel where he has worked with every genre of music available in SoundBoard Theater. He received formal training at The Recording Institute of Detroit, a local audio training school. Over his career, Mike has recorded hundreds of songs, worked hundreds of shows and amassed a variety of industry contacts ranging from audio/video technicians, audio engineers and recording studios to music producers, songwriters and musicians.

This site uses Akismet to reduce spam. Learn how your comment data is processed.